The 1996 PMBOK Guide version of the American Project Management Institute provides the following definitions of project management:  Project management is the application of knowledge, skills, tools and techniques to ensure that the project activities fulfil, or exceed the expectations.

The extent to which we exceed the expectations of the stakeholders, determines the extent to which they perceive the project as being successful. A later version of the PMBOK Guide is more precise and defines project management as: Project management is the application of knowledge, skills, tools and techniques to ensure that the project activities deliver the desired result. ‘Exceed’ has been removed, because it could be a justification for giving in to customer demands for additional requirements without any limits. Project success here means that the project team delivers what has been agreed, no more and no less. As more people are involved, leading, therefore, to more expectations, you are confronted with different views on the alleged success of a project. This means that even though the project sponsor ultimately discharges the project manager and his team, it is not sufficient just to take account of him; there are more parties.

It is quite a job to ensure that all interested parties perceive the project as being a success. Even if project plans have been approved, and the packages of requirements have been unambiguously established, it does not mean that this is exactly what the interested parties expect. This process, in which you, as project manager, must constantly monitor to ensure the expectations still tally with what was agreed at the outset, is often referred to as “managing the expectations”.

A lot of literature talks of project success as being when the end result has been delivered on time, according to specifications, and within the agreed budget. The focus of this definition is on the product or the result of the project. A narrow definition, because you can also look at the way in which that result has been achieved. In this case, success is about the product delivered, and also about the process that led to it. There is only real success, when both of these are successful.

In his thesis T. van Aken gives a simple definition of project success:
Project success is the extent to which the project result satisfies the actors involved.

With this definition, he covers both factors in one go. Before I go into more detail on the various actors and the elements that contribute to satisfaction, it is interesting to summarize the most important findings from his research:

These conclusions have to do with the way in which a project manager manages his projects. In short, when you, as project manager, aim directly at your goal, adapt the structure to what is needed, and do not lean too much on all different kinds of tools (such as super deluxe planning tools and very heavy methodologies), then you have already laid an important foundation for project success.

John Hermarij is author of, inter alia, the book below: 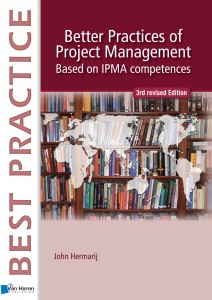