It seems that globalization has reached its boundaries.  We see many big companies retracting themselves to their original core businesses and divesting businesses in foreign countries. Over all there seems to be a less optimistic and more realistic view on globalization and “offshoring”. This blog presents three important arguments for a realistic approach to globalization.

The importance of context

I am, and always have been, sceptical about globalization. An important part of my work consists of creating a good mutual understanding between people. For example, a medical doctor understanding a systems designer when readingsecurity issues related to message-exchange or a systems designer understanding a family doctor for his need to have all information about a patient on his screen within seconds. This work already is challenging in one small country, having relatively small differences between cultures and people.

In my view more than 80% of all mistakes, problems and failed projects are caused by a common factor: misunderstandings between key persons. Misunderstandings which could have been prevented by asking more questions and by sharing more “context”.  “Context” is the background, environment, framework, setting, or situation surrounding an event or occurrence. It is all we know and count with, without explicitly defining it.  One could imagine “context” as a large sphere around us, containing all we implicitly know about a certain subject.

An example in history 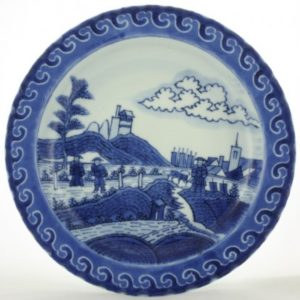 An example in history that perfectly demonstrates what happens when someone has work done by a person who doesn’t share his context is in the “Chine de Commande” (French for “commissioned porcelain”). In the 18th century the richer Dutch, French and English families ordered porcelain in China, based on European landscapes, famous persons and family coats of arms. The pictures were sent by boat to China and after some time the porcelain dishes, cups etc returned (also by boat). But as you can see on this figure, the Chinese artists carefully followed instructions when they drew objects they didn’t know (the church and the triangular roofs of the houses), but they followed their own “context” with objects of which they thought to be familiar with (the two Chinese persons on the left side). And there are also many examples of dishes on which the heraldic lion (presented on many family crests) is replaced by either a Chinese dragon or the Chinese “foo” dog. 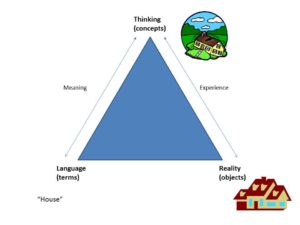 The semantic triangle (triangle of reference) reflects the relationship between an expression and the subject of that expression.  The triangle shows that we use language (terms) to pinpoint subjects in the real world (objects). Our thinking is in concepts, these concepts are triggered by the terms we use, but for us these concepts are also based on our experiences with the real objects. The term is not the object itself, but its identifier. So, when we, as a sender, use language to transfer our thinking, we expect that the receiver of our message shares more or less the same experiences. In that case the interpretation of our message will correspond more or less with our own thoughts.

However, in the situation the sender uses terms in his communication which trigger different concepts in the thoughts of the receiver, the receiver will end up with a different view on the (real) objects.

Missing context is one of the reasons that one cannot simply transfer work to another culture or another society unless after a thorough verification that all relevant ‘context’ is transferred too.  And it doesn’t help when all the people involved have to translate from their own language to English and back again.  The English translation for “dokter” in Dutch is “doctor”, but the Dutch word “dokter” is normally used in the meaning of “family doctor”, “general practitioner”.  When people in India, Vietnam, China etcetera translate “doctor” into their own language they will probably end up with the equivalent of “someone who has a degree”.  And even when the meaning of the Dutch word “dokter” is properly translated into Hindi, Vietnamese or Chinese, the question still exists if an Indian, Vietnamese or Chinese “general practitioner” does the same things and uses the same tools as his Dutch colleague.

Bringing work to other parts of the world can be a good idea from the perspective of (visible, direct) costs, but it will generate a lot of lesser visible indirect costs and may put a drain on quality. The problem with English as “Lingua Franca” is that it seems that we understand each other, but we maybe agree on different concepts (like the Chinese men on the dish).

Our world is rich, diverse and differentiated and should not be compared with a “global village”. The Dutch word “globaal” means “approximately” (ongeveer), and I see that as an omen.

When you have no money, nothing to eat, work is a prime means to survive. Every job that pays will be more or less ok for you. But as soon as you are financially more or less in good shape you will look for work that aligns with your ideas about the meaning of life. You’ll probably be more motivated and work harder and more pleasantly when you can see meaningful results of your work. Meaningful results in the way you perceive.

So, managing the data centre of a small factory in your neighbourhood or working in IT in an office or in a hospital you can walk through, situations where you know the people using the results of your work, probably will be more motivating than doing the management of a global network that is used by you-don’t-know-who.  And if the statistics (KPI’s), shown on a large screen, are the only relationship you have with your efforts, your motivation probably will fade away and it will be hard to stay proactive and thorough.  Moving work to far away from the ones that benefit from it is –in my vision- asking for people not to think any further and not to bother too much. It steps away from “commitment”. 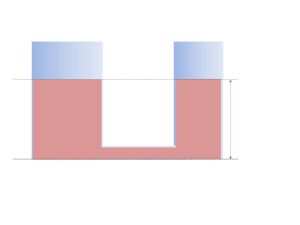 The third reason that globalization is not as easy and successful as thought is related to the well-known law of communicating vessels. This law tells us that a liquid in connected (“communicating”) vessels will always level out. When we poor in more liquid in one of the vessels there will be an unstable situation for a short time, after which the levels will be equal again. So when in one country (for example in western Europe) the costs of labour are relatively high, and in another country (for example India) labour costs are relatively low and we connect these countries by globalizing and “off shoring” two things are going to happen:

This will cause a relatively “unstable” situation during some time, until the balance is restored and labour costs are more or less equal.

Despite the difficulties with regard to globalization as described above, there are situations where we can see globalization really working:

Perhaps this is the real “global village”, a volatile moving community of world citizens, sharing knowledge, skills and local specialities. And maybe this kind of globalization will survive the short-term, cost-driven way to exploit the world which, as we can now see, is reaching its boundaries.